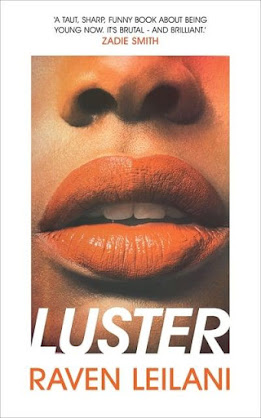 Luster is Raven Leilani's debut novel. The narrator, Edie, is a twenty-something African American woman who, struggling to pay off her student loans and without the safety net of family to fall back on, finds herself living with her white, middle-aged boyfriend and his wife, and their black adopted daughter. .
The story begins with Edie, the narrator, meeting Eric, who announces that his marriage is an open one. The two begin an affair, which Edie describes in dispassionate, cynical terms. Then, while Eric is away on a business trip, Edie finds herself in desperate circumstances. And it's not Eric who comes to her apparent rescue, but his wife Rebecca.
Luster reminds me slightly of Candice Carty-Williams' Queenie. Edie, the protagonist, has had a similarly traumatic and troubled childhood, is one of the few black employees in her office (she works at a publishing house while Queenie worked in journalism) and regularly makes unwise, self-destructive choices, particularly when it comes to men (specifically, I think, white men). Like Queenie, Edie is struggling to afford her rent in an exceptionally expensive city - this time, New York, where she shares a cockroach-riddled apartment.
But Luster is written in a much more literary style, sometimes self-consciously so, and it's also completely and deliberately missing the warmth and heart of Queenie: it's a bleaker book and a more ambiguous one. Some of the writing is extraordinary and affecting, although there are some moments where the power of the narrative is lost in the language rather than enhanced by it. Moreover, Queenie does, at least, have some positive relationships in her life - not with men, certainly, but with friends and relatives - while Edie is without family and without friends. She and her flatmate barely seem to speak and her working relationships are uneasy at best and sourly dysfunctional at worst. Her relationship - if you can call it that - with Eric is downright disturbing, and there are elements that become more so once we learn that his adopted daughter is black.
However, it's with that daughter, Akila, that Edie makes what seems to be her only positive human connection with another person. Akila, like Edie, has been orphaned in traumatic circumstances and is friendless at school. While she doesn't want for material things, she is a black child with white parents in a predominantly white neighbourhood. She bonds with Edie over video games and comics, but what's most touching is Edie's long and complicated quest to teach Akila how to look after her afro-textured hair. Towards the end of the book, Edie and Akila are stopped by the police and treated appallingly, another common experience for African American people which Eric and Rebecca cannot hope to understand.
Edie herself is the sort of protagonist you don't have to like to find interesting and, crucially, to feel sympathy for. She is a mass of flaws and neuroses and extremely self-absorbed, but it's not difficult to see why. She's utterly alone in the world and through no fault of her own is constantly one pay cheque away from homelessness, which leaves her open to exploitation - by employers, by landlords, by the men she meets, and by affluent white people who are simultaneously fascinated by and wary of her (embodied in Luster principally by Rebecca, who can't quite decide whether Edie is something to be feared, studied or used).
That said, I did find myself rolling my eyes at Edie more than once. She makes the same mistakes repeatedly and seems to learn nothing from them. At the start of the book, we find her working in publishing, a job which she describes as if it's akin to working in McDonald's, and the reader is apparently supposed to agree with her.
And yet her job is by most standards a highly desirable one in a competitive industry which tends to favour affluent middle-class applicants who can afford to take on unpaid internships for experience. Her role is not the most exciting one out there, but she has her foot in the door and manages a small team, which is certainly more than I did at 23. And while I certainly sympathised with her living situation in a squalid flatshare, I was merely annoyed when Edie mentions that the only cutlery in the apartment consists of three butter knives: she is not a child, has been living independently from a young age and is not so poor that she can't afford to buy herself a knife and fork. I found that slightly self-conscious, hapless millennial persona slightly irksome, although I recognise that this an issue with me, and not with the book.
There are some odd, almost surreal moments in Luster, which at first I found a little jarring, but as the story develops they do seem to fit well with Edie's fragile state of mind. It's not always clear whether Edie's reading of a situation is an accurate one, or whether she's interpreting people's motives correctly. The awkwardness of her interactions is almost painful at times, and this sense of things being constantly 'off' is enhanced by the sheer oddness of her relationship with Rebecca.  Edie is a talented artist and when she begins to draw everything around her, it's almost as if she's dissociating, stepping outside her own environment and looking in, or perhaps trying to make sense of the world by committing it to paper.
Luster has a lot to say about racial and sexual politics and about guilt and exploitation. Artistically, it feels pleasingly uncompromising. Even at the times when they didn't quite work as I felt they were meant to, Leilani's decisions on character and style in this book are impressively brave. It's an accomplished debut and I hope to see more from the author.
Email Post
Labels: african american america black book review debut literary fiction luster mental health misogyny new york race raven leilani unreliable narrator women