Haven't They Grown by Sophie Hannah 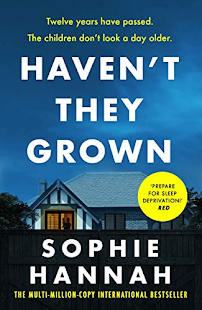 After reading Shuggie Bain, which was brilliant but exhausting, I wanted to read a gripping thriller with a mad, page-turning plot as a sort of literary dessert after a heavy main course. I'd been intrigued by the blurb for Sophie Hannah's Haven't They Grown for ages and had enjoyed some of her previous books so decided to give it a try.

First things first: the premise of this book is an absolute belter. Beth, a happily married mum of two teenagers, is driving her son Ben to his football match away one Saturday when she realises the ground is not far from the home of her former best friend, Flora. Beth and her husband Dom used to socialise constantly with Flora and Lewis Braid, but haven't seen each other for twelve years after Flora and Beth mysteriously fell out. Overcome with curiosity, Beth drives to the Braids' address and is shocked to see Flora pull up in her Range Rover and get out with her two children, Thomas and Emily. But Thomas and Emily Braid were five and three last time Beth saw them over a decade ago... so why are they still the same age?

This is one of those books where you feel you cannot rest until you have an answer to the central question, and I've no doubt that I'd have raced through Haven't They Grown even if it were terrible, but happily it's not.

For a start, I really liked Beth, Dom and their children, Zannah and Ben, which may seem like a small thing but it's actually quite unusual that the family at the heart of this sort of domestic noir thriller aren't unbearably smug and irritating. While Dom has serious misgivings about Beth's quest to solve the mystery of Flora and her children, he is kind, rational and prepared to not only believe what his wife saw but also help her find out more. I also liked their relationship with Zannah and Ben - they're not overly lenient with them, but neither are they pushy or patronising towards them.

Sophie Hannah is an observant writer who knows exactly which details will reveal enough about her characters and their lives, while rarely resorting to clichés. Beth's desire to find out what the hell is going on spirals into an all-encompassing obsession as the plot thickens, but in a way that feels completely credible - if I were Beth, I don't think I'd rest until I'd got all the answers either.

My main criticism of this book is that the resolution of the plot is frankly bonkers - although in fairness, it's also horrifying in a way that feels almost gothic and borders on the camp, a bit like the heightened plot excesses of Lisa Jewell's Then She Was Gone or even Virginia Andrews' Flowers In The Attic and in a way that I actually quite enjoyed once I'd suspended my disbelief, and became quite gleeful about. The other notable weakness is that Lewis Braid, who is supposed to be a sort of unpredictable but charming maverick seemed so transparently awful to me from his very first appearance that I couldn't believe Beth (or, even more so, Dom) would only 12 years later realise with hindsight that he was in fact a complete dick.

Haven't They Grown is not for you if you're looking for a plausible, realistic crime story. But if you want a twist-filled psychological thriller full of 'Wait, WHAT?' moments, this is one I can recommend.