What We're Scared Of by Keren David 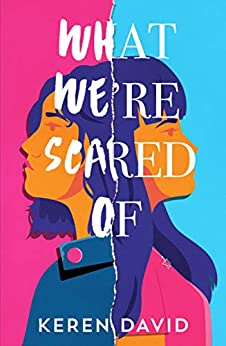 Keren David's What We're Scared Of is a young adult novel about twin teenage girls growing up in South London. They're as different as they could possibly be: Evie is short, curvy, sociable and an aspiring comic, while Lottie is tall, athletic, anxious and studious. Not only do the girls have very different looks and personalities, they also go to different schools - Lottie's a selective one and Evie's a comprehensive.

While both girls are aware that their mother, Bex, is Jewish, that's about the limit of their knowledge of Judaism. But then a combination of events sees them both forced to confront their own relationships with Judaism and Jewishness as they start to become aware, for the first time, of the very real dangers of antisemitism.

Evie and Lottie are both 14 and while I'm no expert my guess is that it would be a good read for kids aged 11 and up. Although I appreciate that I was reading What We're Scared Of as an adult, there were perhaps two occasions when I felt an issue could have benefited from a little more depth and at the very least, been questioned by the characters, even for a younger readership. But for the most part, while the book deals with some serious themes - identity, racism, faith, terrorism - it does so in a way that's about right for its intended readership level, while also frank and non-patronising.

The different facets of Jewish life and culture are explored cleverly through other characters, such as Lottie's classmate Hannah, who is fiercely proud of her heritage but also grapples with the patriarchal traditions of Orthodox Judaism, and Noah, whose family have moved to London from Paris after he and his father were attacked on their way to the synagogue and who has come to believe that Israel will be the only place he'll be welcome. Also in the book is a powerful unedited account of a real Holocaust survivor, Mala Tribich - a wise and respectful inclusion.

What We're Scared Of has subplots about friendships, school, relationships and the usual trials of teenage life, which for me as an adult reader tried my patience a little at times, but which are appropriate and relevant for the book's intended audience. It builds to a tense, thriller-style conclusion and it treats its subject in a way that's sensitive and accessible.