An Island by Karen Jennings 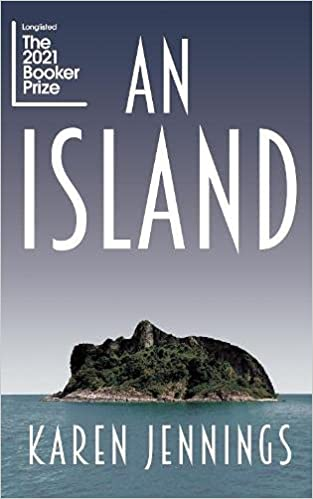 An Island is a short, Booker-longlisted novel with a fable-like quality to it, set in an unnamed African country with a troubled history of colonialism, conflict and corruption, and written by South African author Karen Jennings.

Samuel is an elderly lighthouse keeper who lives with his chickens on a tiny island, growing odds and ends of food of his own and receiving a small delivery of supplies once a fortnight by boat from the mainland. Samuel's own past is as turbulent as that of his country, and there's a strong sense that his solitary existence represents not only peace and safety but also a sense of control over his own life, something denied to him by circumstance during his decades on the mainland.

Every now and again, a dead body will wash up on the shore of the island - refugees, we assume. Samuel dutifully buries them without a great deal of concern, until one day, he comes across the body of a man that still has a pulse, and the presence of his visitor becomes an allegory for not only our innate suspicion of outsiders and of being 'taken over', but also a fundamental mistrust and fear of invasion borne of past colonial oppression.

As Samuel wonders just what do with his visitor, who doesn't speak his language and doesn't know which chicken is Samuel's favourite, the story flashes back to Samuel's own life story, encompassing displacement from the family farm at the hands of colonial settlers, an impoverished childhood in the city where he falls in with a group of child criminals, a revolution and then, as it becomes apparent that the new government is a dictatorship as oppressive as the old one, a second attempt at overturning the country's leadership and a 25-year spell in prison that erases any chance Samuel might have had at rebuilding any kind of relationship with his family.

As I write this review now, it strikes me as remarkable how much Karen Jennings actually manages to say in such a slim little book as An Island. The vignettes from Samuel's life story manage to convey the whole history of his home country and the effects of its repeatedly poor governments and periods of unrest on its people. Samuel's solitary existence on his tiny island has been entirely shaped by his country's past, and when he finds himself having to accommodate a visitor, there's a strong sense that this is yet another period in his life when a fragile peace has been shattered.

Samuel's life has been repeatedly disrupted by upheaval, leaving him instinctively and guiltily fearful of imminent change. He knows that he should try to accept the man washed up on the shore of his home, but he also feels a simmering resentment of him, constantly on the verge of boiling over into outrage. And we know that in his youth, Samuel was not immune to taking out his anger at his own repression on those he perceives as different: for the most part, Samuel is a gentle, likeable old man who simply wants to be left alone, but we do know that he hasn't been immune to being caught up in reactionary violence before now.

As you can probably tell, An Island is not a happy read and there is a lot of violence and misfortune to contend with. The respite comes from the descriptions of Samuel's quiet, solitary life of routine on the island, but of course that is disrupted by the arrival of the unnamed refugee and the anxiety of Samuel's response. This is, however, a beautifully written and powerful book, despite the tragic inevitability of the story it tells.