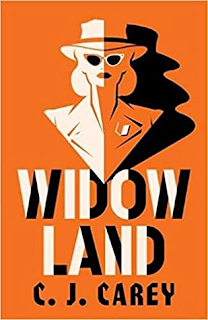 Widowland is an alternate-reality dystopia in which Britain is a protectorate of Nazi Germany, led by Alfred Rosenberg. Friend of the Nazis Edward VIII is about to be crowned as king with Queen Wallis at his side and Hitler as the guest of honour. Our heroine, Rose Ransom, works at the Ministry of Culture, rewriting classic novels to bring them more appropriate for a Nazi readership, and is also having an affair with her married German boss.

So far, so Fatherland - but there are also echoes of George Orwell and Margaret Atwood, and these are far from subtle. Like Winston Smith, Rose writes down her own forbidden stories in a special notebook that she hides in her tiny flat, and as in The Handmaid's Tale, women have been legally classified into social castes, according to role and status.

Rose is a Geli: a top-tier member of the Aryan ideal caste that bears the name of Hitler's beloved niece, and is therefore unmarried, attractive and employed by the regime. Her sister is married to an important man and, crucially, is mother, which makes her a Klara. A Leni might be woman with a skilled white collar or creative profession, while Paulas perform caring roles like nursing and teaching, while Magdas work in factories and shops and Gretls do jobs like cleaning and kitchen work. At the very bottom of the social hierarchy are the Friedas: women over 50 who are childless, unmarried or widowed.

All the women in CJ Carey's novel lead lives that are governed by their classification in every way: the colours they wear, the buildings they live in, their access to entertainment and even the number of calories provided by their rations, which leaves the Friedas scraping by, sharing accommodation in slums and trying to feed themselves by growing vegetables. The satirical point here, of course, is that older, single women past childbearing age are often treated as undervalued and invisible by society.

The protectorate seems to have Britain fully under control, stamping out any kind of dissent with all the vicious rigour you would expect from the Nazis. But just as the coronation is imminent and Hitler (who for some reason is referred to only as the Leader in the book) is due to arrive, graffiti has started to appear - graffiti that quotes from banned or censored books, and goes directly against the regime's fascist values. Rose is tasked with trying to find out who might be responsible, in the guise of doing some academic research, and that leads her to the Friedas' slums, the Widowland of the novel's title.

The basic premise of Widowland is excellent, with solid world-building, a vivid sense of place, and interesting points to be made about literature, feminism and the power of words, but while the idea is sound, the execution is shaky. There is an awful lot of telling and not enough showing, a great deal of exposition, and as I mentioned above, it does feel very derivative. I have no problem with books being inspired by other literary sources, especially ones that have entered our consciousness to the degree of The Handmaid's Tale and Nineteen Eighty-Four. I'm also a sucker for alternate history and what-if dystopias. But I also think taking inspiration and paying homage can draw unfavourable comparisons with the source material, and that was the case for me here.

Character descriptions were prone to descending into cliché. All the German men are either sophisticated, handsome officer-class types in jackboots, or fat, greedy, bald Bavarians who wear lederhosen at weekends. Rose has eyes 'like a lake that reflects back the exact colour of the sky' and Oliver Ellis, because he is a young, English intellectual, naturally has to have untidy hair and glasses.

I also had some issues with the plot. For example, I found it pretty hard to believe that Rose could tell her forbidden feminist fairy stories to her six-year-old niece without being found out, given that six-year-olds are notoriously chatty and Rose's sister and brother-in-law are committed loyalists to the fascist regime. I also struggled to understand why Rose seemingly fails to grasp the intensity of the Nazis' antisemitism: it's understandable that, like the German people during the War, she'd be unaware of the horrors of concentration camps, but it seems highly unlikely that living in London under a regime that stripped Jews of human rights and forced them into ghettos, she wouldn't have noticed that persecution in action.

That said, if you pick up Widowland looking for an interesting, alternate history period thriller with an engaging plot, you could certainly do a lot worse. Margaret Atwood it is not, but I read it on holiday and I was more than happy to keep turning the pages.