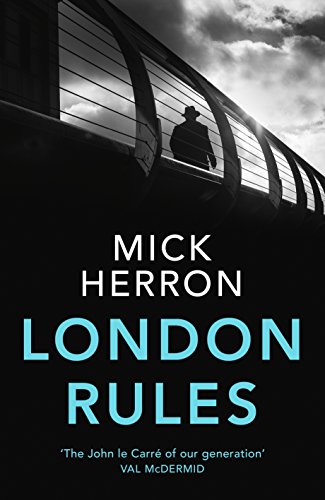 I think it does help if you've read the other four books first (Slow Horses, Dead Lions, Real Tigers and Spook Street, in that order) as they establish the characters and the relationships between over the course of the series and if you read the later ones first there are spoilers for things that happen in the earlier books, but it's not absolutely essential.

To briefly recap, the series is about a group of MI5 agents - 'slow horses' who, for various reasons ranging from terrible mistakes made in the field to addictions and mental health problems, have been shunted off to a grim satellite office and given menial, routine tasks to do because they can't be trusted on the frontline. Their boss is Cold War veteran Jackson Lamb, a shambling slob who knows too much to be pensioned off.

Lamb himself remains an absolute gift of a character. Deliberately obnoxious, lacking in personal hygiene and excessively flatulent, he is nonetheless exceptionally sharp and exceptionally dangerous. Lamb is perhaps at his most appalling in this instalment of the series, but this only makes him more entertaining. As in previous books, there are revelations about his past that help us to understand how he remains not only employed but also alive, but we sense there's still an awful lot about Lamb that we don't know. We do know he used to be an undercover agent, or 'joe', and it's never quite clear how much of what we see is the real Jackson Lamb and how much is simply another cover - perhaps Lamb no longer knows either.

The plot of London Rules centres around a series of terror attacks - which, of course, Lamb's 'slow horses' aren't allowed anywhere near; while their colleagues at the Service HQ are investigating they're left to do things like trawl through library records to see who's been borrowing books about Islam. But then one of their number, charmless computer hacker Roderick Ho, is almost assassinated. More suspicious than that, though, is the fact that he seems to have a girlfriend, and when the slow horses set out to find out why on earth Ho might be a target, they become embroiled in something far, far bigger.

There are a lot of surprises in the plot and our expectations are constantly subverted, even within the first few pages. It's also topical and laced with biting political satire - Brexit, Islamophobia, the rise of populism and 'controversial' right-wing columnists are just a few of the topics that Herron tackles, and for all its gritty atmosphere and tension, London Rules is often exceptionally funny - the humour definitely increases as this series progresses. The dialogue is witty and sharp yet somehow feels credible too. And although all the Jackson Lamb books are based in London, as the title suggests this one feels much more rooted in the city - despite a great deal of the real action taking place elsewhere, London feels as much like a stalwart supporting character as it does a setting.

Then there's the Intelligence Service itself, depicted not so much an organisation as a world in its own right with its own history and folklore - as the author says, "There's nothing Spook Street enjoys more than a legend, unless it's a myth", and in this regard Herron is as skilled a world-builder as any writer of fantasy or sci-fi.

This series seems to be getting stronger and stronger, and despite the wit, there's an encroaching darkness at the end of London Rules which suggests the next book could, for Lamb, be the most dangerous yet. I can't wait.

My thanks to John Murray Books for providing me with a review copy via NetGalley. You can buy London Rules here in hardback or here for Kindle.