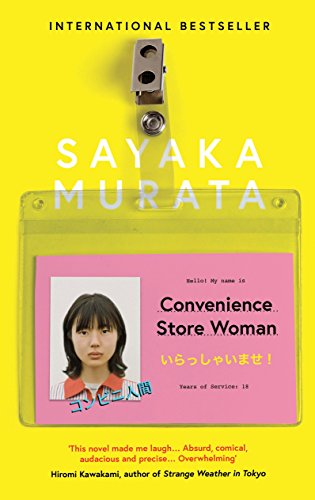 'Irasshaimase!' says Keiko Furukura brightly to the customers who visit Smile Mart, the convenience store where she works. It's a Japanese greeting that's specifically used to welcome customers into shops and businesses, and Keiko has perfected her delivery of it from the Smile Mart training video. And this is why Keiko loves her job so much. There's a manual for everything, including a set of rules for human interaction, and that's exactly what Keiko's been looking for all her life.

Convenience Store Woman is Keiko's story. Keiko is 36 and works in a 24-hour convenience store in a business district of Tokyo. It's a dead end job, but it's one that suits her. Ever since she was a child, Keiko has struggled to understand how to behave normally with others. When a playground fight between two boys needs to be stopped, she decides to take charge by smashing one in the head with a shovel and is confused when her classmates react with horror at his collapse; she pulls down her teacher's skirt and underwear to stop her shouting and while other children are burying a pet budgie that's died, Keiko wants to eat it. As she gets older, surrounded by a loving family and not wanting to make them sad, she makes a conscious decision that she hopes will help her avoid such terrible mistakes: 'I would no longer do anything of my own accord, and would either just mimic what everyone else was doing, or follow instructions.'

So the convenience store, with its unchanging routines and clear rules for everything from saying hello to stacking pre-prepared rice balls, is the perfect environment for her. While managers, students and 'job hoppers' come and go, Keiko ploughs on, copying the speech patterns and dress of her colleagues to fit in, following every instruction to the letter, carefully assessing product demand according to special offers and the weather, and telling people who want to know why a woman with a degree has been working part-time in a convenience store for 18 years that she has some unspecified health condition that doesn't allow her to take on anything more demanding. But while her (few) friends and family can just about accept her lack of career, they've started to quiz her about her lack of interest in romance.

What Keiko needs, she decides, is someone that other people might at least begin to assume is her boyfriend - and that's where Shiraha, her charmless, chauvinistic colleague, comes in.

Don't be fooled into thinking that this is a feel-good tale in which a couple of lonely misfits find each other, or in which people rally round to save a bullied oddball from a life of solitude. This isn't a book like Eleanor Oliphant Is Completely Fine or The Rosie Project. It is certainly funny at times, but in a way that's much odder, starker and more unnerving than that. Shiraha is a bitter, bullying misogynist who, one imagines, might spend a lot of time on internet forums for 'incels'. And while there's nothing actively vindictive about Keiko, her inability to comprehend social norms can be disturbing. Just as we're starting to find her quite endearing, for example, her baby nephew cries and her sister has to pick him up and soothe him: 'What a lot of hassle,' thinks Keiko. 'I looked at the small knife we'd used to cut the cake still lying there on the table: if it was just a matter of making him quiet, it would be easy enough.'

That said, this is still a love story of sorts, it's just that the object of Keiko's love is the convenience store, and its routines and environments are beautifully, even hauntingly described by Sayaka Murata (translated to perfection by Ginny Tapley Takemori). The tinkling door chime, the beeping bar code scanners, the bright light and the clean, neat displays of 'pristine, machine-made food' - a 24-hour store for Keiko is a 'transparent glass box that is still stirring with life even in the darkness of night', a soothing aquarium of peaceful, steady activity.

This short novel is hard to categorise, in the best of ways. It's often comic, but there's a darkness to it too. While there's something weirdly life-affirming about Keiko's love of her job - the only thing, she says, that makes her 'a normal cog in society' - we have to consider what might happen to her when the day comes that she's not able to do it any more. Keiko herself, with her studied imitations of others and her odd impulses, can certainly be an unsettling character, but she's also vulnerable. Convenience Store Woman is surprisingly immersive for such a short book and despite the starkness of Keiko's narration, it's atmospheric too - and while Keiko and her story are undeniably bizarre, I could absolutely believe in them.