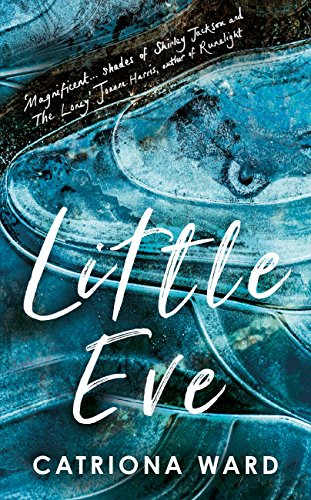 Catriona Ward's first book, Rawblood, was a richly intoxicating Gothic ghost story. With Little Eve she ventures into folk horror territory with this dark fever dream of a novel that begins with what appears to be a ritual mass murder committed within a mysterious cult on a Scottish island.

It's 1921 and young butcher Jamie MacRaith is delivering a side of beef to the castle of Altnaharra, cut off from the mainland at high tide. We know from the start that things in this novel will not be quite right - we're told that Jamie still 'hears his father moving about' in the room he occupied before he died. What Jamie finds at Altnaharra, however, is a horror on a grander scale. A number of people have been killed and mutilated - except one of the victims, his former classmate Dinah, suddenly moves. Traumatised and terribly injured, she is the only witness to the killings. The rest of the novel pieces together the events of the years leading up to this grisly discovery, as well as its aftermath.

The Little Eve of the title is Evelyn, who, we're told, has killed the other residents of Altnaharra and disappeared. Evelyn and Dinah have grown up on Altnaharra with John Bearings, a middle-aged man who has apparently adopted them, and assorted other members of his cult - middle-class Alice, pregnant Nora, Baby Elizabeth (actually 11, but unable to speak) and Abel, the only boy. The nature of the religion the group practises is hazy, its rules strict but arbitrary, and appears to include elements of nature-worship, doomsday cultism and snake-handling. We learn of its horrors through Dinah and Eve, who narrate sections of the story. But can we trust two brainwashed, half-starved girls to piece together what really happened at Altnaharra? How strong is their grip on reality - and what might they each have to hide?

Little Eve is a skin-crawlingly creepy read. Bearings is known to his charges as 'Uncle', which is in itself horribly sinister when juxtaposed with his behaviour. The power he holds over the others at Altnaharra, manipulating them through sheer cruelty while impressing upon them that he is their benefactor and saviour, is chillingly convincing. There are also gruesome moments that undoubtedly shock, but they're used sparingly enough to retain their impact and don't feel gratuitous.

Eve and Dinah make interesting narrators, and the structure of their sentences, particularly when Eve is talking about her time at Altnaharra, adds to the relentlessly menacing atmosphere. It can be a little repetitive and whenever I became strongly conscious of it, I found it hardere to immerse myself in the book  - like a lot of literary devices, it's at its most effective when it goes unnoticed - but fortunately, for the most part I could settle into its rhythm. The descriptions of the coastal landscape of the far north of Scotland, a part of the world I know well, ring vividly true.

There are sections of Little Eve where the story moves away from the suffocating oppression of Altnaharra and take us to Loyal, the nearby village, and to Tongue, on the coast, and to Inverness, and these offer a welcome respite: without them, and the characters we meet there, I think the claustrophobia of the cult would become overwhelming. We - and indeed the characters - need the contrast between Altnaharra and the outside world to make sense of the story that unfolds. And despite the heightened, hallucinatory horror of this novel, the motives and actions of the characters, even when shocking, are often psychologically credible: we can see why they might behave the way they do. There are a couple of characters who could be a little better fleshed out as their relevance to the increasingly complicated plot, packed as it is with deception and revelation, begins to build - although equally, the degree to which cults attempt to obliterate individuality is certainly important too, so the balance here is a delicate one.

Little Eve is a literary horror novel with a languid pace and a haunting, dreamlike feel. It's exceptionally well-written and has a powerful sense of place, the characters' connections to the landscape bringing to mind the work of Andrew Michael Hurley or Wyl Menmuir. Rawblood was such a strong and original debut that I worried Ward's second novel wouldn't quite live up to it, but Little Eve certainly didn't disappoint. Outstanding stuff.