Our House by Louise Candlish 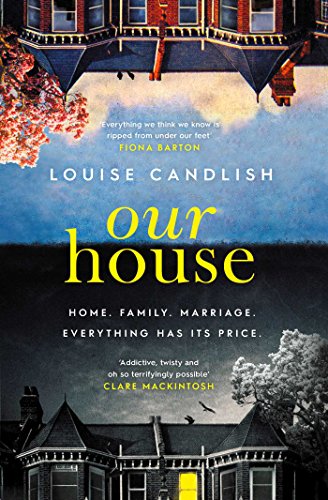 Our House opens with Fi Lawson coming home a day early from a short break, and discovering a strange couple moving their belongings into her empty house. It must be a mistake, Fi thinks, or an awful practical joke - but it doesn't take long to confirm that the Vaughans have, indeed, bought her house, entirely without her knowledge. Fi's furniture and possessions are gone. Her children have been taken out of school. And her husband Bram is nowhere to be found...

This nightmare scenario makes for an excellent opening to this domestic thriller, after which the events leading up to the loss of the house are pieced together through transcripts of a podcast called The Victim, which Fi uses to tell her story, and a Word document typed by the absent Bram. There are also some third-person sections - it seems to be de rigeur these days for this type of secrets-and-lies thriller to be told in this way, mixing first and third person and switching narrators, although I'm not sure it always adds a great deal to the storytelling.

Fi and Bram have agreed to separate following his second reckless infidelity, but it's a relatively amicable and civilised split: sharing custody of their young sons, they take it in turns to stay at their large home in an affluent south London suburb. When one parent is living at the house, the other lives in a rented studio flat. Bram is charming and rakish but also impulsive and rebellious, while Fi is efficient and practical, a born worrier who likes to stick to rules - but after some minor teething problems, their arrangement seems to work. Until Bram makes a terrible mistake he can never admit to, and his deception spirals terribly out of control.

The fact that it's the couple's house that's at the centre of the mystery is telling, with The Guardian suggesting it's a sign that 'the property porn thriller looks set to become a staple of crime fiction'. There are certainly some wry satirical digs in Our House at the middle-class obsession with owning the perfect property with the perfect neighbours in the catchment area for the perfect school, and the possibility of having to sell the house upon splitting up with Bram does seem more a concern to Fi than the breakdown of her marriage. However, we all desperately fear losing the roof over our heads. The opening scenes in which Fi finds strangers calmly moving into her home really are chilling, and I defy anyone to read them without feeling deeply sorry for her.

It's the rest of the book that tested my sympathies somewhat. Put simply, Fi and Bram struck me as simply rather difficult to care about. As Bram's part of the story unfolds, it's clear we're meant to sympathise with the terrible predicament he's in, but the fact remains that the mistake that effectively ruins his life is solely due to him being wilfully, inexcusably obnoxious. Fi, meanwhile, treats him rather as she might a third child who kept losing his school PE kit.

While the book kept me turning the pages simply to find out what would happen, I didn't engage much with the characters and the tension lags considerably in the middle section: this novel could easily be 100 pages shorter than it is. The publisher's blurb gushes that this is the book 'with THAT OMG ending' and yes, there are some twists in the last few chapters, but they're a long time coming. This is a thriller with a corker of an opening and a clever, intriguing conclusion, but a pacier journey between the two is what's needed to make this book really stand out from a currently crowded genre.