I was attracted to Harriet Tyce's Blood Orange by positive endorsements that suggested it was a strong example of the 'domestic noir' genre. These sorts of books are hugely popular at the moment and there are some brilliant examples out there, but I think it's hard to separate the wheat from the chaff. The blurb for this one (and, interestingly, the cover, which steers away from the usual shadowy, black-and-white grainy image with a portentous title across it in neon block capitals) suggested it was a cut above the rest. 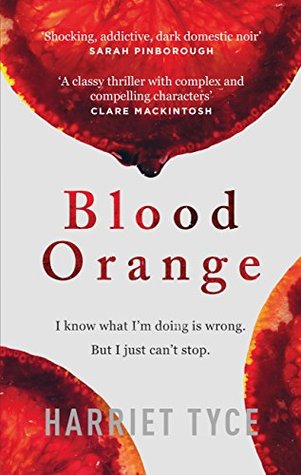 Unfortunately, I'm now a bit annoyed with myself for being swayed by the marketing, because I found this book disappointing. The protagonist is Alison, a barrister married to therapist Carl, with whom she has a young daughter, Matilda. Alison is having an affair with Patrick, a work colleague: it's the sort of affair that involves Alison getting drunk after work with her fellow lawyers and then having rough sex in the office before passing out. Carl, left at home to look after Matilda, is understandably unhappy with Alison's heavy drinking and broken promises, but he's so sanctimonious and sneering about literally everything - including her cooking, her childcare abilities and her appearance, all of which she actually makes a lot of effort with - that it's hard to feel particularly sorry for him, particularly while Alison's well-paid job is financing his career and paying the mortgage on the home in which he runs a support group for men suffering from sex addiction.

Riddled with guilt, Alison repeatedly tries to end her relationship with Patrick - who is also awful, by the way - but willpower isn't her strong suit, particularly when she finds herself working with him on a murder case. The defendant has stabbed her husband to death and fully intends to plead guilty, but Alison is convinced there's something not quite right about her client's testimony and is determined to find out the truth. While Alison starts to uncover the truth about the build-up to the murder, she starts to receive anonymous, threatening text messages - and they're clearly from someone who knows her guilty secrets.

As you can probably tell, this is one of those books in which the protagonist is a terrible mess who makes self-destructive, risky decisions - all very The Girl On The Train. However, the problem here is that everyone else in the book is also appalling, and there's not enough else happening to make this interesting. Carl and Patrick felt like caricatures to me - Carl's sneering, petty superiority and his earnest talk of his men's group and their 'breakthroughs' are sharply observed, and Patrick's line-blurring behaviour towards women and subsequent self-pity are also recognisable, but there's not a lot more to them than that.

This isn't, however, my biggest issue with this book, which is that it is blindingly obvious what's going to happen. It's not so much foreshadowed as clearly signposted at every turn. Psychological thrillers like this rely on eerie tension, constant uncertainty and ideally an unforeseen jaw-dropper of a twist, but I found none of these in Blood Orange. Perhaps this a case of an author believing they were writing one sort of book and the publisher marketing it as another.

I won't go on, because I'd have to spoil the plot, but it's enough to say that I'd be amazed if the outcome of this story surprises many readers and I found myself waiting for a revelation that never came.
Email Post
Labels: blood orange book review crime domestic noir harriet tyce legal thriller misogyny murder psychological thriller thriller