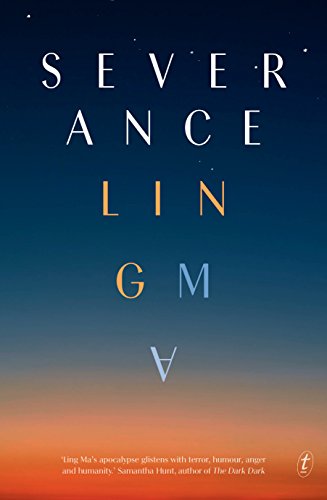 Ling Ma's Severance is narrated by Candace Chen, a millennial living in New York as the world succumbs to an epidemic of Shen Fever, a disease from China spread by fungal spores which cause sufferers to descend into a sort of trance and repeat in their final days the meaningless routines that linger in their memory: "they could operate the mouse of a dead PC, they could still drive stick in a jacked sedan, they could run an empty dishwasher, they could water dead houseplants."

The fevered are essentially harmless, so this isn't a zombie apocalypse horror story - it's a quiet, thoughtful novel in which the real threat comes not from the fevered but the survivors, who, in the case of the group Candace joins, predictably descend into cultish behaviours that can only end in trouble.

The post-apocalyptic storyline, however, is really only a small part of the book. Interwoven with Candace's experiences after Shen Fever strikes is the story of her relationship with her parents, their move from Fuzhou, China to Utah, and her years living in New York after graduating. In New York she abandons her ambitions to become a photographer and takes a job working in production for Spectra, a firm of publishers. Candace works in the Bible department, doing a job so routine that it sees her plagued by recurring dreams of inadequate paper stock crumpling in printing presses. Candace is oddly comforted by the routine of her job, despite the dubious ethics of sourcing suppliers in China whose staff work in appalling, often dangerous conditions, dying of diseases caused by precious stone processing so that her employer can produce the 'Gemstone Bible', aimed at American teenage girls in the Bible Belt and sold with a semi-precious charm attached.

Candace, perhaps partly because of her immigrant roots, is nagged by a slight sense of otherness, and is curiously detached from the world around her - I don't think it's an accident that her first love is photography, an activity which requires her to observe rather than participate, and yet somehow she also barely notices when the world starts to end around her. However, while she doesn't appear to enjoy her job as such, she is strangely comforted by it, as if its very meaninglessness brings a meaning to her life that's otherwise lacking. When others are leaving New York as Shen Fever takes hold, she continues to turn up to work. Eventually, she's the only employee, continuing to send emails and attempting to schedule production tasks long after the rest of her colleagues have died or fled and Spectra's Chinese suppliers have succumbed to Shen Fever themselves.

Is Candace, perfectly healthy but turning up day after day in an almost empty city to do a job that no longer really exists, much different from the fevered woman she observes in a clothing store, repeatedly folding the same items over and over again as she rots alive? And when her contract is finally over and she decides to leave New York with a group of fellow millennials, armed with "bottled water and exfoliating body wash and iPods and beers and tinted moisturiser" looted from an abandoned WalMart, will she manage to survive in a world without meaning, and avoid succumbing to the deadly Shen Fever which might - just might - be triggered by nostalgia? What might just save Candace, it seems, is her immigrant experience. Candace doesn't feel any real affection for any of the places and things she encounters on her journey across America: for her, the place that triggers those feelings of intense, unnerving nostalgia is her original home city of Fuzhou.

This is a novel of complicated ideas, simply written - but it's also often funny. Candace herself has a detached, observational wit, self-deprecating but never performatively so. It's sad too, imbued with a completely unsentimental melancholy. If you're looking for a post-apocalyptic rollercoaster ride of a novel, this isn't that book, but I loved this understated satire of consumerism, missed opportunities, modern living and the immigrant experience, and would definitely look out for more work by Ling Ma.