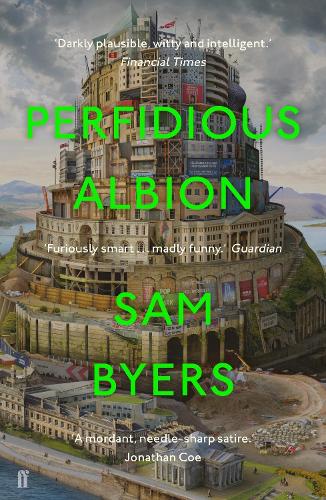 Sam Byers' Perfidious Albion is a political and technological satire set in the very near future. Right-wing populism, data harvesting, the erosion of social housing, and social media shaming all come together in this uncomfortably plausible novel set in Edmundsbury, a nondescript English town which becomes a dystopian microcosm of post-Brexit Britain.

Edmundsbury's most rundown estate is earmarked for demolition so it can be replaced by a new hi-tech development, but some of the existing residents are refusing to move. One of them, Darkin, is an ageing working class white man who lives alone in his decaying flat and who soon becomes a symbol of a supposedly neglected demographic for both the far-right politician and columnist Hugo Bennington and liberal online journalist Robert Townsend. There's also Trina, a young black woman living in a polygamous relationship, who becomes a symbol of something very different when she tweets '#whitemalegenocide. lol' in reaction to Bennington's populist hyperbole and inadvertently becomes one of the most hated women in Britain.

Meanwhile, a protest group has formed, and are staging strange, unnerving stunts in which they threaten to reveal the online activity of random members of the public. Who are they, and what's their goal?

Many of the characters in Perfidious Albion are painfully recognisable, if not especially three-dimensional. Bennington, with his secret meetings with Tommy Robinsonsesque fascists, feels horribly real, as does his millennial alt-right assistant, who exists solely on Huel. Robert, who finds himself somewhat at the mercy of a click-chasing editor, is the kind of columnist who is not quite as woke as he thinks he is and is slightly horrified when some of the underlying implications of his columns are distilled into something much more concentrated and black-and-white than he intended. His girlfriend Jess, irritated by the direction his work seems to be taking, spends her own days creating fictional digital personas - and soon begins to find interesting uses for them.

The bizarre working practices and jargon at Trina's office will seem all too plausible to anyone who has worked in certain types of environment, and the way in which social media becomes a weapon with which to terrorise an entire population will also ring true. The media's role in pushing certain public figures to prominence is familiar too.

However, while the sociological and political satire works well, albeit not always subtly, the technological storyline is far less engaging. The characters, while they exist to serve a comic purpose, are not people I found it particularly easy to care about - they do feel, to me, much more like types than individuals - and the story overall lacked pace. It is absolutely an entertaining and a darkly funny read, full of astute observations and sharp dialogue, but it does sometimes lag a little and I found myself tempted to skim-read at a couple of points in the story. At times, Perfidious Albion gives the impression that it aims to be a cross between the work of Jonathan Coe and Neal Stephenson, but I don't think it's as good as either and as such was perhaps less than the sum of its parts.