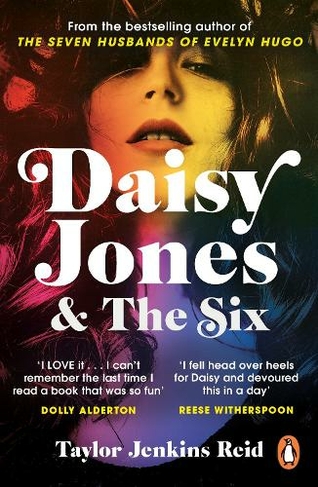 There seemed to be a real buzz around Daisy Jones & The Six by Taylor Jenkins Reid when it appeared in paperback, and after hearing a discussion about it on BBC Radio 4's A Good Read I thought it sounded like something different and original and decided to give it a try.


Written in the style of a rock biography compiled from interviews, Daisy Jones & The Six is the story of a fictional band, The Six, and their collaboration with singer-songwriter, former groupie and renowned beauty, Daisy Jones. Daisy and The Six have both experienced some success in their own right, but it's only when Daisy performs a duet with Billy, the creative mastermind and lead singer of The Six, that the magic really happens. Daisy Jones & The Six find themselves soaring towards stardom as well as critical acclaim for the era-defining music they write and perform together. The reason for their sudden, acrimonious split at their peak of their success has never been fully explained, and this book attempts to piece together what happened.

Because the story is told through the words of so many different people, we also get conflicting accounts of certain incidents and people. Who should we believe? Or does everyone, ultimately, have their own truth?

The book is set mostly in Los Angeles during the early 1970s and it's a book bathed in Californian sunshine. If it had a scent, it would be patchouli, weed, sweat and vodka. The strong evocation of the location and period is actually by far my favourite thing about the book. It's headily atmospheric and the descriptions of people and places and clothes, the smells and sights and sounds, given by the band members to their interviewer are exceptionally well-chosen. With a book like this, it's difficult to strike a balance between having the characters give enough detail to build a picture for the reader and making sure they do so in a way that's still convincing as something a musician might have said in an interview, rather than in a way written by a novelist, but Taylor Jenkins Reid manages to do this effortlessly.

I don't, however, think the book is as strong on story as it is on atmosphere - the trajectory is clear from the start and I would defy anyone not to guess the reasons for the band's split even before they're fully formed. Only three members of the band - Daisy, Billy and Karen, the pragmatic, perceptive keyboard player - seemed properly fleshed out. The rest, even Graham, Billy's brother with whom he has a fractious relationship, do start to blend into one another after a while. There's a point at which describing the writing and recording of albums becomes somewhat repetitive, too.

Plus, there's the small matter of the song lyrics. If they weren't important to the story, I could have overlooked the fact that they are terrible, but we're supposed to believe that they are coming from the hearts of two supremely talented creatives who are using them to express their every hope, fear, obsession and resentment. They are supposed to have a powerful emotional impact. But written down there on the page they ... just aren't very good. I just couldn't believe in them as lyrics and I couldn't believe in a lot of the titles either. Perhaps if we were hearing them performed as songs, this would be different - I'm sure the lyrics of Fleetwood Mac, on whom Daisy Jones & The Six are very obviously partly modelled, don't work tremendously well in isolation either. But as these are words we will only ever read, they let the book down and detract from what would otherwise be a more immersive read.

Daisy Jones & The Six is a great book to read on a hot day or a sultry summer evening after nightfall - I would have recommended it as a holiday read if there was any possibility of any of us actually going on holiday this summer. For the reasons above, I don't think it's quite the stroke of genius that some readers believe it to be, but it's atmospheric, escapist and very, very rock'n'roll.
Email Post
Labels: 1970s american fiction book review california daisy jones & the six LA music rock biography rock music taylor jenkins read