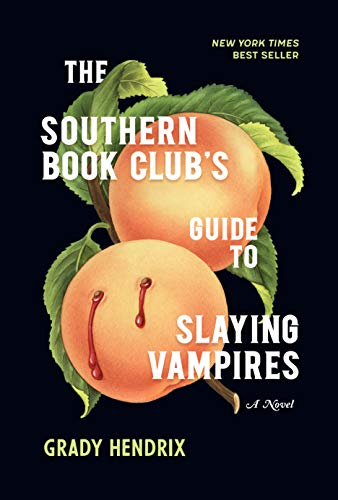 Full disclosure: like a lot of people during the coronavirus pandemic I've been struggling to concentrate on reading (there's an interesting article about that here) and I listened to The Southern Book Club's Guide to Slaying Vampires as an audiobook. It works very well as an audiobook because it's set in Charleston, South Carolina and the accents are key to the sense of place.

The author, Grady Hendrix, is known for his horror fiction which often refers to, and plays with, the conventions of existing horror films and novels. His previous book, My Best Friend's Exorcism, was set in the 1980s and this one is set in the early 1990s. The best way I can describe it is that it's a bit like a slightly camp cross between Salem's Lot, Big Little Lies and Steel Magnolias with a tiny hint of The Stepford Wives.

In it, a middle-class Southern housewife, Patricia Campbell, tries to enlist the help of her book club to defeat James Harris, a man who has recently moved into their affluent neighbourhood and whom she believes to be a vampire.

The book group, I should point out, only ever discusses one type of book, and that is true crime of the grisliest kind. Obsessed with serial killers, these big-haired, wholesome Southern ladies are not 'a bunch of Sunshine Suzies', as one of them points out, and are no pushover. But can they really be persuaded that the charming newcomer is a monster to be defeated?

The Southern Book Club's Guide To Slaying Vampires is sometimes very funny, occasionally camp, with sharp, witty dialogue and brilliantly observed characters. Some of the set-piece horror moments are gruesomely over-the-top, too - this is more action-horror than slow-build eeriness. The setting is also huge part of the book's charm. People have names like Leland and Maryellen and Slick and Horse and unironically call their children Korey and Blue. One of the book club members writes down the registration number of any unfamiliar car that passes through the neighbourhood, 'just in case'. Everyone knows each other and everyone assumes that everyone else goes to church. Iced tea is constantly served. I've been to Charleston and it's an utterly charming town, but there's just enough of the Southern Gothic about it to make it feel right for this book.

However, there are other points to be made. The social conservatism is oppressive and the economic and racial divide that separates Charleston's communities are stark. Ursula Greene, a nurse hired to care for Patricia's elderly mother-in-law Miss Mary, lives not in the genteel Old Village but in the impoverished and semi-deserted Six Mile, where the authorities don't care if black children go missing and the tap water 'smells like eggs'.

There's also a strong feminist thread running through the story, which intensifies as the plot unfolds. It's no accident that all the women of the book club seem at their most alive when they're together, and that it's the men in their lives who repeatedly hinder their ambitions - sometimes in a way that's well-meaning, but sometimes in a way that's sinister and abusive. Even the book club changes when Charleston's men get wind of it, and when the men close ranks in opposition to the women, it's chilling. The villain of the piece is ostensibly James Harris, Patricia's insidiously charming vampire neighbour, but there is more than one husband in this book who could qualify for the same title and with this in mind, there were a couple of moments later on in the book that almost knocked me for six.

I think James Harris is more than just a monster: he's also a metaphor for certain other things that drain the vitality from society. Patriarchal values, racism and greed are as much of an adversary in this book as the vampire.
Email Post
Labels: 1990s america american fiction american south book review comedy deep south feminism grady hendrix horror racism satire the southern book club's guide to slaying vampires vampires