Hearts of Oak by Eddie Robson 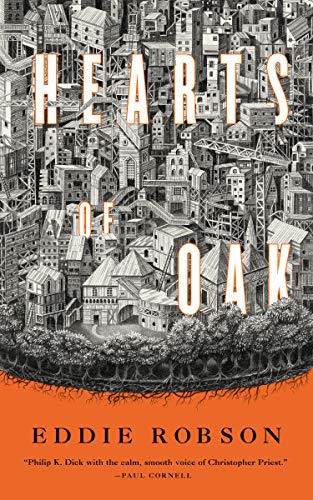 Eddie Robson's Hearts of Oak is one of those books that's immediately intriguing and instantly raises questions you'll want to know the answers to. What is this city where everyone seems to be obsessed with building for the sake of building? Why is Iona, the protagonist, unnerved by sudden flashes of knowledge of things that shouldn't exist? And why, for the love of God, is the King's chief adviser a talking cat?

Iona is an architect, nearing retirement. And there's a lot of demand for architects in the city, because it's a city that is constantly expanding in every direction with new and impressive buildings - although it's sometimes unclear why they're needed. Just as Iona is approaching the end of her career, a colleague of hers dies, a shocking incident occurs at his funeral, and a conversation with a new acquaintance suddenly jolts Iona into remembering things that don't make sense. Concrete, for example. Iona's never heard of it, but at the same time she somehow knows exactly what it is.

The slightly unnerving feeling of something being just not quite right in a environment that should be bordering on utopian is evoked very cleverly. Nobody in the city is unemployed or homeless, everybody seems affluent and educated and whenever the King commissions yet another new building project, there's no concern over funds. But, in the way of the leafy suburb of Stepford, or The Village occupied by The Prisoner's No6, or even The Truman Show's Seahaven Island, there's an underlying sense of unease.

I've rarely read a novel as short as this that fits in quite so much: there are some huge themes and complex ideas. And yet the prose style is so beautifully economical that they are expressed bin a way that is refreshingly - and skilfully - simple. Deeply odd things happen a great deal in this book, and they happen with a simple, elegant clarity: Eddie Robson's writing is an excellent example of EB White's advice to 'be obscure clearly' and this, along with the presence of the King and his cat, gives the story a sort of fable-like, fairy-tale quality which makes the later plot developments all the more startling.

I should also add that Hearts of Oak is often very funny. The sheer absurdity of the King's adviser being a talking cat and more to the point, nobody questioning this, is an excellent comic device in itself and there are shades of Douglas Adams here and there.

Hearts of Oak was an ideal lockdown read for me. It's set far outside the realms of our reality, so it feels escapist enough to read in a crisis, but it's also short and accessible and its world is also established quickly and with ease. It sets up enough intrigue in the first few pages to keep me curiously reading on at a time when I was otherwise struggling with concentration, and it also raises some thought-provoking questions about what makes us the people we are.
Email Post
Labels: book review comedy eddie robson fable fantasy hearts of oak sci-fi science fiction