How To Survive Everything by Ewan Morrison 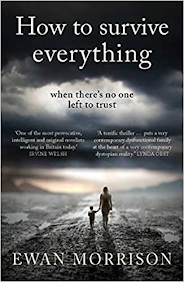 I'm going to something I rarely do and post a review that includes spoilers, because my chief criticism of How To Survive Everything is so inextricably linked with its ending that it wouldn't be fair if I didn't mention it. If you don't want to know how this book ends, don't read past paragraph three.

The narrator of How To Survive Everything is Haley, the 15-year-old daughter of divorced parents. She has a much younger brother, Ben, who has ADHD. Her mother, Justine, is brisk, capable and immaculate while her father Ed, a former journalist, likes building Heath Robinson contraptions, outdoor survival activities and various other things Justine doesn't approve of. Haley is a typical teenage girl, glued to her phone and embarrassed by her parents, but she seems to have a significant anxiety problem, most often triggered by being asked to make a choice - apparently a consequence of the acrimonious family split during which Haley believed she was being asked to choose between her parents.

The story is set a few years after the Covid-19 pandemic (I assume Morrison wrote it during the 2020 lockdown). Ed's investigative journalism has convinced him there's another, much worse pandemic on the way that will cause complete societal collapse, and he's been setting up a small community of preppers: an environmental activist called Meg, her teenage son Danny, an ex-squaddie called Ray, and the mysterious Kade, an aggressive, shaven-headed woman who seems to have some form of paranoid disorder. The novel begins with Ed essentially abducting Haley and Ben to the compound he's set up, complete with infection control measures, border fences and guns, with the intention of saving them from the pandemic. But when Haley manages to make contact with her mother, Ed decides he'll have to abduct Justine too.

Justine tells Haley what most readers will have thought blindingly obvious from the start: Ed has a long history of serious mental illness and has stopped taking his medication and attending psychiatric appointments. His paranoid delusions and obsession with conspiracy theories is, in fact, the reason his access to Haley and Ben has always been so closely controlled. Over the years he's attempted suicide, been sectioned and been addicted to drugs. It was through Narcotics Anonymous that he met Meg and Ray.

Haley sets about supporting her mother's escape plan - but then suddenly, just as Ed has predicted, the National Grid goes down. Shortly afterwards Ed returns from an expedition to the outside world with horrific injuries. And suddenly, it seems that Ed isn't actually mad at all.

Throughout the book, Haley veers between extremes, from preferring one parent and preferring the other, believing in the pandemic and not believing in it, to hating Meg's son Danny and being passionately attracted to him, and although this reflects her debilitating difficulty in making decisions, it makes for a tiresomely repetitive read, and it doesn't help that Haley felt like a middle-aged man's caricature of a teenage girl with stereotypical interests and language. I found her curiously naive for a 15-year-old and I don't believe for a moment she would failed to realise - for years - that her father was mentally ill.

But this is where the biggest spoilers are about to appear, because my biggest problem by far with this book is this: after some horrifically traumatic moments (without access to medical care, it becomes necessary for Haley, Meg and Justine to perform an amputation), and after even Justine has accepted the reality of the pandemic and started to play an active role in the running of the compound, Haley discovers the real truth of the National Grid failure and her father's injuries and realises there's actually no pandemic at all. But seeing her parents apparently getting along and her brother burning off his excess energy and no longer faced with the constant choices that plague her in the outside world, she says nothing.

This would be an interesting twist if the book ended right there. It would be a damning indictment of the toxic impact of an acrimonious divorce on a child and of the overwhelming connectivity and abundance we're faced in a modern world, and a thought-provoking satirical outcome.

This, then, is my colossal issue with this book: a paranoid, delusional father who abducts his own children with the intention of separating from their mother forever, acts like a cult leader, advocates shooting people on sight, abducts, imprisons and abuses his former wife and generally behaves like the worst sort of selfish Fathers 4 Justice dickhead is someone we're suddenly supposed to sympathise with and believe.

Justine is a smart and resourceful woman in a successful job who has brought up Haley and Ben alone, and while of course she has her faults, I hated the way she was portrayed as a stereotypical cold, slightly bullying career-woman like something from bad 1980s TV drama. It's Haley narrating the story, and yet her descriptions of her mother read like something a bitter divorced husband would write in his revenge fantasy after his ex-wife gets the house. Ed takes away Justine's children, abducts her, restrains her, has her doused in bleach in case she's infected and imprisons her in a shed and yet his former wife a) starts to like him again, b) agrees to devote her days to domestic chores and c) does away with her designer clothes and makeup, which because they're feminine we're supposed to think are shallow and silly rather than just, you know, a nice thing she likes.

It seems pretty clear that the new world the group will be building once the rest of the population has been wiped out is going to be yet another patriarchy, then. And it also seems we're supposed to be on board with it.

I'm writing this review in year two of the Covid-19 pandemic, just as we're trying to return to some sort of normality amid rising infection rates. For the past 18 months, dangerous idiots have been spreading misinformation and scare stories and ranting about the 'bias [sic] MSM' while sharing links to YouTube videos made by angry men who live in their mum's basements and hate women. Conspiracy theories - Covid is a hoax; Covid was deliberately created for population control; vaccines will kill us; it's all down to 5G; society is collapsing so start stockpiling food and buy a gun - are dangerous, paranoid nonsense and are actively damaging the pandemic response and causing unnecessary deaths.

So is this the right time to publish a novel in which the key message is 'Hey, that unstable, paranoid bloke who abducts his kids from their mum, imprisons his ex-wife, starts a doomsday cult and plays with guns? He's the kind of guy you should listen to. He's the real visionary here!'?

No. No it is not. And that's my final word on the matter.