While I was on holiday in Scotland last month I picked up several paperbacks from The Ceilidh Place in Ullapool. Although I do have a Kindle, whenever I visit a town that has an independent bookshop I try to buy a couple of books at least to support it. The Ceilidh Place is a small hotel with a bar-restaurant and cafe and its own bookshop and is a great place to stay, eat or drink and well as to buy books from a really interesting and well thought-out selection. 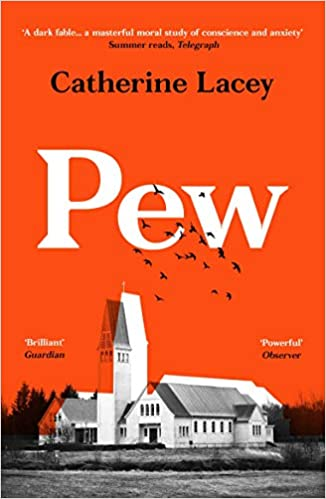 Anyway. One of the books I bought was Pew by Catherine Lacey, a short novel about a stranger's arrival in a small Bible Belt town in America. Pew is the title character, so named by the townspeople because they don't know their real name: Pew is either unwilling or unable to speak and has no identification. Neither the townspeople nor the reader know Pew's gender, age, race or history - and it seems more than possible that Pew, who narrates the story, doesn't know these things either.

Upon finding Pew asleep in the local church (hence the name), the townspeople set about finding them a place to stay and trying to coax some information out of them. But Pew's refusal to speak or reveal anything about who they are soon exposes the conditions the townspeople have on kindness. They're frustrated at being unable to categorise Pew and unsure how to relate to them as a result. Pew's silence also means that people feel the need to talk to them to fill the void, and a result, Pew is privy to some startling and disturbing secrets. While Pew is immediately taken under the wing of a local family and introduced to a psychologist who wants to help them, there's something oddly stifling and intrusive about their kindness. A teenage refugee living in a foster home, to whom Pew is introduced, seems to tolerate rather than enjoy his situation, biding his time until he can safely move on.

Pew isn't, however, the only unusual one in this scenario. The town itself seems unnervingly insular, and there's talk of a mysterious 'Forgiveness Festival' coming up, one that has religious undertones seemingly of the townspeople's own making. Children are excluded from the festival and, as a result, spread rumours that there'll be a human sacrifice. There won't, of course - but the reassurance that Pew 'will get a blindfold just like everyone else' doesn't exactly fill Pew, or the reader, with confidence. There's also a clear racial divide in the town which seems somehow different from the type of divide you might expect in a town in the Deep South. Why have the black community - no less religious than their white neighbours - opted out of the Forgiveness Festival, for example?

Pew is a short book and in some ways a frustrating one. There are no answers, no conclusions and no real plot as such; it reads like a fable or allegory but there are so many possible interpretations and so many different facets to it that it's hard to piece together a clear message from it. Sometimes it seems to be a book about gender, sometimes about race, sometimes about trauma and at other times it reads like a story from a weird-tale collection by Robert Aickman, or Shirley Jackson's The Lottery, and when I finished reading and put the book down I felt unsatisfied at first, even slightly annoyed.

However, it's only now that I'm writing this review and trying to make sense of it that I realise I actually enjoyed it a lot more than I thought I did - it's one of those delayed gratification novels that you didn't think you liked much but then find you can't stop thinking about. I think I now have my own interpretation of who or what Pew is, and the burden they bear, but I'm sure what you take away from this book is different for everybody.