The Truth About the Harry Quebert Affair by Joël Dicker 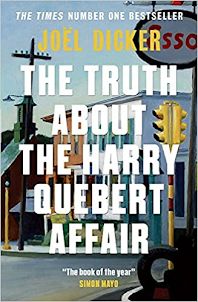 It's taken me a long time to review Joël Dicker's 2014 smash hit novel The Truth About The Harry Quebert Affair, which I actually read a couple of months ago now. I think I've been stalling because I still don't quite know whether I liked it or not, so my apologies in advance if this review is a contradictory mess.

The protagonist, Marcus Goldman, is a young writer whose first novel has been a runaway success, but who is now, amid the distractions of wealth and fame, struggling to write a single word of the second book he owes his publisher. Hoping to break his writer's block, he seeks the help of his former college professor and mentor, Harry Quebert. Harry, like Marcus, shot to fame upon the publication of a hugely acclaimed novel, written in a sleepy New England coastal town where he now has a home by the sea. It's there that Marcus goes in the hope that the peace, quiet and Harry's irascible but reassuring wisdom will kickstart his creative process.

Shortly afterwards, Marcus discovers that back in his mid-30s, Harry had a relationship with a 15-year-old girl, Nola Kellergan, who subsequently disappeared. And most damningly of all, Nola's body has been found buried in Harry's garden. Marcus, convinced that Harry is no murderer, takes it upon himself to find out the truth - and his publisher sees a golden opportunity for Marcus to deliver on his promise of a second book.

This is the story of Marcus's investigation, of Harry and Nola, and of the writing and publication of Marcus's book. It's all very meta and post-modern and it's as much about the blurring of fiction and non-fiction and the lies we tell ourselves and others as it is a crime thriller - although it also has everything you'd expect from a crime thriller too. Somerset, the town in which Harry lives and where Marcus stays to write his book about the murder case, feels like a cross between Twin Peaks and Peyton Place, where everyone knows everyone else but everyone has a dark secret to hide. There's an unscrupulous lawyer and a grumpy cop and in Marcus, a protagonist who comes in from outside to observe it all.

I think the reasons I have such mixed feelings about The Truth About The Harry Quebert Affair are twofold.

First of all, I'm still unsure whether some of the more implausible elements and some of the more cliched language are a deliberate pastiche of detective fiction or not. The novel is by a Swiss author and was first published in French, so it's hard to know what's Dicker and what's his translator, but there were lines that felt more like something from a day-time crime drama than a literary novel, which is what the book seems to have been marketed as. The convoluted plot, which certainly makes it entertaining, is also sometimes absurd and the book is far longer than it needs to be, so while it has the plot of a thriller it lacks a thriller's pace.

And secondly, when all's said and done, we are expected to sympathise with a man who at the age of 34 had an affair with an underage girl. Regardless of whether Harry murdered Nola, we are supposed to believe that he was in love with her and that she was the muse behind his most celebrated novel, The Origin of Evil. And yes, I know the 70s were a different time, but really? 15? Nola herself is in every conceivable way a victim of the people around her, and with the publication of Marcus's In Cold Blood-style true crime book about her murder, she's exploited and misrepresented all over again in death.

That's not to say there isn't a lot about this book to enjoy. I liked the small New England town full of seedy secrets, I liked the slightly offbeat townspeople (the owner of the diner where Nola was employed as a waitress and her husband wouldn't be out of a place in a John Waters film), I liked the absolutely terrible agents, editors and publishers who surrounded Marcus, and his perpetually furious mother. I also liked the way both Marcus and Harry have in many ways created themselves as characters, just as they've created the characters in their books. But ultimately, Nola's own story is the most interesting one, and instead she's mostly reduced to being Harry's fantasy. In short, I don't think The Truth About The Harry Quebert affair really quite knows what kind of book it is, and I think it suffers from being translated.