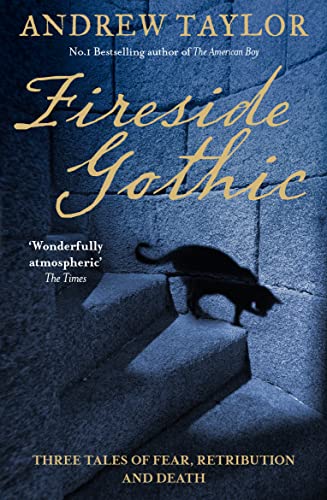 Fireside Gothic is a sort of omnibus of three novellas by Andrew Taylor, who is best known for his historical and crime fiction. The three stories in Fireside Gothic are Broken Voices, a ghost story about two desperately lonely boys who are forced to remain at their boarding school over the Christmas holidays, The Leper House, about a man who becomes embroiled in a sinister turn of events on the way home from his estranged sister's funeral when his car breaks down during a storm, and The Scratch, in which the nephew of a well-off middle-aged couple is invalided out of the army and becomes convinced that he is being stalked by a cat-like creature that lurks in the woods.

All three stories have in common a slow-build psychological horror that owes a debt to the likes of MR James and Susan Hill with a dash of Edgar Allan Poe. Although these are indeed ideal fireside reading (and would make excellent BBC Christmas ghost story adaptations) I wouldn't necessarily describe them all as gothic. However, the atmosphere conjured up by the title does give you a general idea of what you're about to read. These are engrossing, creepy stories ideal for a dark evening.

It's fair to say that there's more going on than just supernatural chills in all three stories. The narrator of Broken Voices is a 15-year-old boy at boarding school whose parents are overseas and who clearly craves company and a family life during the holidays, but the stiff upper lip mantra has been instilled in him so relentlessly that it would be unthinkable for him to express his loneliness. The plight of the narrator and his fellow pupil Faraday, left to board over Christmas with an eccentric elderly man, stifled by boredom and shifted from pillar to post for their meals, is almost painfully sad, and it's easy to see why orphaned Faraday is so utterly distraught at losing his position as the leader of the cathedral choir, the only thing that gives him a sense of status and belonging, when his voice breaks. This element of the story is easily as strong, if not stronger, than the ghost story element, which creeps into the plot rather late. It's a traditional ghost story that's elevated by strong and convincing characterisation and emotional depth.

The second story, The Leper House, was the one I found the most creepy and, from a psychological point of view, the most interesting. It has a rather unlikeable and possibly unreliable narrator, and manages to make a recurring motif of pigs seem strangely unnerving. While it's not a ghost story in the traditional sense, it also has elements of time-slip and other eerie aspects that I enjoyed, and the strange relationship between the narrator and his sister could almost have been a story in itself. There's a real sense of unease that hangs over this story.

I found The Scratch the least successful of the three stories by. Perhaps it's because I always find supposed big cat sightings in the British countryside hilarious, or perhaps I just can't find 'monster' stories frightening, but I just couldn't engage very well with the story of Jack, the traumatised soldier, and the apparent curse that had followed him home from Afghanistan. I didn't find the narrator or her husband particularly interesting, and there was little there that struck a chord with me. This is the last of the three stories in the book, which was a shame, as I'd have liked it to end on a higher note.

Overall, though, this is a highly enjoyable collection and reminded me very much (in good way) of the sorts of eerie stories I used to hunt down as a child.
Email Post
Labels: andrew taylor book review fireside gothic ghost stories horror mystery portmanteau horror short stories speculative fiction supernatural