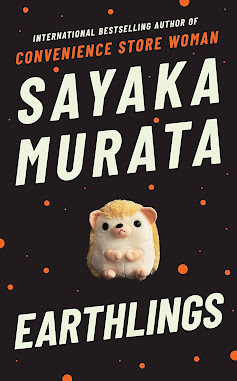 A couple of years ago I read Sayaka Murata's novel Convenience Store Woman, which is a profoundly odd but weirdly endearing novel about a Japanese woman who finds it so difficult to interact appropriately on a social level that she essentially falls in love with working at a convenience store where there are set procedures for every eventuality.

Earthlings by the same author is even more odd and considerably darker, disturbingly so at times. Like Convenience Store Woman, the protagonist is a young woman who despite her best efforts fails spectacularly to conform the the rigid expectations of Japanese society. Natsuki, 11 years old and hovering on the brink of puberty, lives with her emotionally abusive mother, selfish sister and ineffectual father. Natsuki struggles to understand social norms. It's unclear whether this is because she has some sort of neurodivergent condition like autism or whether it's simply that her family situation has left her with no frame of reference for ordinary social interactions (there is no point in the entire novel at which her mother says anything nice to her) but her browbeaten passivity makes her painfully vulnerable - something her predatory teacher exploits in the worst of ways.

Natsuki's loneliness and confusion lead her to retreat into a fantasy world in which her toy hedgehog Piyyut has awarded her the gift of magical powers and she is an alien from a planet of her own invention, struggling to assimilate with the earthlings. Society is the Factory, existing only to make babies, and Natsuki is simply an observer.

Natsuki's only joy comes from her annual holidays in the remote mountain home of her grandparents, where her extended family gathers every summer for Obon, the Japanese festival of remembrance for which dead ancestors are honoured. There she forms an intense bond with her cousin Yuu, who shares her fantasy of being a mere visitor to Earth and pledges a lifelong allegiance to her - until something goes terribly wrong.

Fast-forward 20 years or so and Natsuki has entered into a celibate marriage of convenience with Tomoya, an asexual young man apparently traumatised by his relationship with his mother (who 'made him share her bath until he was 15'). When Natsuki takes Tomoya to the mountains to see the neglected family home, now occupied by Yuu, the three misfits form a deeply peculiar, dysfunctional alliance. And that's when things get really weird. I'm not quite sure how much is supposed to be real and how much is the product of Natsuki's imagination, but either way, buckle up for a bumpy ride.

Earthlings is sometimes very funny, sometimes gruesome, sometimes shocking - there are few taboos that aren't tackled here, and the contrast between the horrors of what Natsuki describes and the matter-of-fact, childlike way in which she does it is sometimes comical, sometimes unsettling and sometimes, particularly when she talks of what is clearly dissociation in response to trauma as if it were one of her magical powers, it's desperately sad. The further the book goes on, the  more grand guignol it gets - it reminded me in some ways of Mona Awad's Bunny, which probably took the prize for my strangest read of 2019, but at the heart of the story there are serious issues to be considered. The expectations of Natsuki's family and friends that there is something wrong with her if she doesn't have a baby, the difficulty of being a misfit in an uncaring, psychologically abusive family, and the contrast between the sexualisation of very young schoolgirls in Japanese culture and the absolute horror with which children's own sexual feelings are treated.

There is quite a gear change part of the way through Earthlings which I don't think is entirely successful: the more outlandish events are asking a lot of the reader's suspension of disbelief and the transition is too abrupt. There were also some moments where I wasn't sure if the language was indicative of Natsuki's childlike manner or just awkward translation. I don't think this book lives up to Convenience Store Woman - all the more noticeable because it deals with so many of the same themes - I do think it's a deeply weird, subversive novel that has all the makings of a future cult favourite.