Fleishman Is In Trouble by Taffy Brodesser-Akner 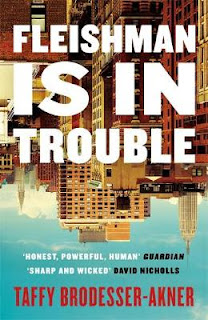 Fleishman Is In Trouble is a smart, witty novel about neurotic middle-class New Yorkers. Toby Fleishman devoted father of two in his early 40s and a hepatology consultant at a prestigious hospital, is newly divorced from his cold, intensely ambitious wife Rachel. One day, Rachel - apparently never the most loving of mothers - drops off their children unannounced at Toby's apartment in the early hours of the morning.

And then she disappears.

As Toby juggles childcare, a potential promotion and his unexpected popularity on the online dating scene, all while having no idea what's happened to his former wife, the narrator starts to piece together the history of Toby and Rachel's relationship. But what seems at first to be an omniscient narrator is revealed very early on to be Libby, a former journalist and an old friend of Toby's from their gap year in Israel who is now a stay-at-home mother. How objective is Libby as she tells the Fleishmans' story?

Taffy Brodesser-Akner is herself a journalist known for her magazine profiles of public figures, and that perceptive eye for detail is apparent here - Brodesser-Akner knows exactly what it is about someone's language, appearance and dress, even their lunch order, that will be unexpectedly revealing, and this really comes through in Libby's narrative.

Libby, in describing the women in Toby's life - his ex-wife Rachel, his overbearing mother, his junior doctor colleague Joanie - takes on Toby's perspective, and it's often very funny. Toby is guilt-ridden, browbeaten and just beginning to find his freedom and dip his toe into the murky waters of casual Tinder hook-ups and sexting, and much as he loves his children, suddenly being the sole parent when Rachel disappears sends him spiralling into bitter ineptitude.

But when the book really comes into its own is when Libby starts to digress a little into her own situation and her friendship with Toby and their mutual friend Seth, a charming but shallow womaniser. Gradually, it becomes clear that Libby's own circumstances might tell us something about Rachel too. There are two sides to every divorce story, and soon we find ourselves looking at the gulf between Rachel's life an Toby's: two people in the same marriage, who share children, careers, a social circle and a lifestyle, and yet their lives, their anxieties and the expectations people have of them are somehow so very, very different.

Fleishman Is In Trouble reads a bit like a cross between Philip Roth and Nora Ephron, with a hint of Woody Allen and a smidgeon of Gone Girl. The narrative is digressive and rambling with long flashbacks and reflective asides, its observations are astute and unflinching and its characters almost painfully convincing. You'll begin this book thinking it's one of those American novels about an educated, sex-obsessed man having a mid-life crisis, and indeed it is that in some respects, but it's also a hell of a lot more and it's when women's voices creep in that it really comes into its own.