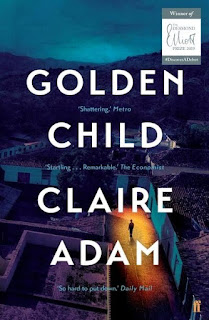 Claire Adam's Golden Child, set in Trinidad, is a book about twins. Peter and Paul Deyalsingh - I don't think their first names are an accident) are non-identical in every way. Peter is an academically gifted prodigy, while Paul, born second and with complications that are assumed at his birth will lead to brain damage, is described by his parents and himself as 'a bit retarded'. He's incapable of learning to read, and when he's taken for his first haircut - a ceremonial childhood landmark for boys in his parents' Indian-Caribbean culture - he becomes so hysterical with panic that he keeps his hair long and wild from that day onwards, and is nicknamed Tarzan by his classmates.

Shortly after the twins start secondary school, Paul disappears. When it becomes clear what has happened to Paul, his father Clyde is asked to make a huge sacrifice to get him back - and then he's faced with a choice that will have repercussions on the Deyalsingh family far into the future. Can he bring himself to rob one son of his future to save the other?

You might think this the set-up for a psychological thriller (and the cover design also seems to be hinting at this) but that's not what Golden Child is - although it certainly has its tense, gripping moments. This is really a family drama of resentments, cultural clashes, poverty and aspiration. The Trinidad of this novel is not a tropical beach paradise by any means. While its atmosphere and landscapes are brilliantly evoked by Claire Adam (who was born and brought up there), there's a constant undercurrent of threat. There's organised crime, corruption and violent robberies. Every family has guard dogs and at the start of the book we learn that the Deyalsinghs have recently been the victims of an armed break-in, despite being obviously struggling for money. All this makes it easier to understand Clyde's intense obsession with Peter's education - it will, one day, be his means of escape - even if we can't accept it as justification for some of his actions.

Throughout the book we learn more and more of the Deyalsinghs' back story, and it rapidly becomes clear that while Peter is very much the golden child both in terms of achievement and conduct, Paul is a kind, curious and observant boy who is intensely protective of his mother. Furthermore, there isn't really any rivalry between the twins - they're close and they look after each other, and when their mother Joy insists against Clyde's wishes that Paul must go to school with Peter so that Peter can help him, I couldn't help feeling that Paul wasn't the only beneficiary of the arrangement. Is Paul really 'retarded'? His teacher, Father Kavanagh, doesn't think so, but Clyde doesn't appreciate the intervention of the would-be white saviour, who seems to him to be patronising and naive.

I do have some criticisms: the ending feels like something from an entirely different book to me and jars tonally, and there are only so many times we can read about Clyde's contrasting views on each of his sons before it feels like the message is being hammered home too often. I also think the novel's pace is frustratingly uneven, and there's a single, disturbing incident which I felt was described in gratuitous detail - although I appreciate that its inclusion is there to make us fully understand the consequences for Paul of Clyde's stalling.

However, the characters, flawed and frustrating as they are, feel convincing and the dilemma at the heart of the story makes for an intense, often very sad, read. The Caribbean setting is something I haven't encountered very often in literature before and I found the portrayal of Trinidad and impact of its historic and socio-economic contexts on its people,  fascinating and enlightening. I would avoid this if you're looking for an uplifting read but it's certainly an accomplished debut and I would read more by the same author.