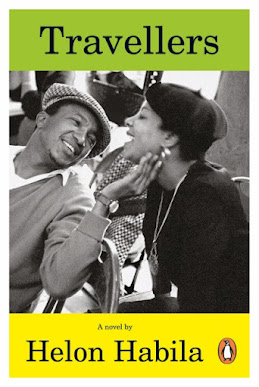 Helon Habila's Travellers is more like a collection of short stories than a novel - it's divided into 'books' and each one tells a story that more or less makes sense on its own. But there are recurring characters and the stories link together, the characters passing each other fleetingly as they travel through Europe.
The book opens with an unnamed Nigerian academic who has come to Berlin with his American wife, Gina. Gina is working on an art project painting portraits of migrants and this is how we meet Mark. Originally from Malawi, has outstayed his student visa and is living in a squat with his anarchist friends, although he seems to the only one of the squatters who doesn't have middle-class parents and a home he could go to. What's unclear is why Mark can't go back to Malawi in the first place. Why is he so terrified of being sent back?
It's through Mark that we're introduced to life in migrant detention centres and from that point on, we meet other immigrants - some refugees, some not, although the lines soon to start to blur - and catch glimpses into their lives. Some are fleeing war, some are fleeing extremist militias or organised crime, while others are simply looking for a new life, sometimes with an entirely new family. Portia crosses paths with  as she travels to Switzerland to find out what happened to her brother, whose marriage to a Swiss woman soured before she was convicted of killing him.
Some of the characters seem to exist almost as two versions of themselves, as if they are travelling in Europe while a copy of them remains in their country of birth. Separated deliberately or accidentally from spouses and family, they begin to compartmentalise - sometimes for convenience, as in the case of the poet who effectively has two families, and sometimes as an involuntary response to trauma, as in the case of a woman whose horrific experience of crossing the Mediterranean to Italy triggers severe amnesia. As you'd expect, there's a lot of musing on the nature of displacement - when we've been partly formed by one place, can we be the same person in another? There's also a strong sense of the anxiety that comes from living in a country of which you are not a citizen, whether illegally or legally. The novel's refugees seem to be perpetual, nervous waiting - waiting for the outcome of an asylum application, waiting for news of distant loved ones, and in some cases, waiting to be found out - and the mental strain on the characters is readily apparent.
But even for the affluent, middle-class PhD student from Nigeria, with his artist wife and liberal friends, there's a sense of precariousness when his right to exist in Europe is bound up in a single visa document, and his story takes a powerful and wholly unexpected turn.
Although I think its episodic, slightly disjointed structure appropriately conveys the transience of its characters' lives, I would have liked Travellers to be a little more cohesive as a story. I would also have liked the women characters to have more of a direct voice - all too often, their stories are told by men, albeit largely sympathetically. But these are small criticisms. After a relatively slow start, I found that Travellers gripped me in a way I really didn't expect it to, and there's something quietly beautiful about Habila's prose.
Email Post
Labels: africa asylum seekers book review europe helon habila immigration nigeria refugees travellers