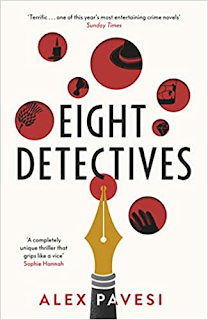 I've mentioned before in my reviews that I'm often drawn to books that are about books, particularly crime fiction that references other crime fiction - Anthony Horowitz does this brilliantly, for example. Eight Detectives by Alex Parvesi is a debut novel that employs a similar metafiction technique to that used in Horowitz's Magpie Murders and its sequel Moonflower Murders, in that there are stories by a fictional crime writer within the novel and these are key to the overarching 'real-life' mystery which a character in the publishing trade is attempting to solve.

In Eight Detectives, Julia Hart has travelled to a remote Greek island to look for Grant McAllister, a mathematician who once published an academic paper outlining the mathematical formulas on which he believes all murder mysteries are based. McAllister's first and only book was The White Murders, a collection of seven short stories which illustrate his hypothesis through examples. Julia, keen to republish the book, reads aloud each of the stories in turn and quizzes McAllister about his method and meaning.

You'll notice, of course, that there are seven stories in The White Murders, so who is the eighth detective of the title? And why do there seem to be mistakes and inconsistencies in each of McAllister's tales?

What we get with Eight Detectives, then, are seven individual 'golden age' detective stories, each of which contains clues to the wider mystery forming he framing narrative - although we don't actually know what that mystery is, or why Julia wants to solve it.

Each of McAllister's seven stories is a neatly plotted whodunnit in itself, and the analysis of the 'formula' for each one is interesting enough, if familiarly straightforward to anyone who already has an interest in the mechanics of crime fiction. The basic principles have been explored by writers and critics for many decades. However, some of them don't read like stories that would plausibly have appeared in a mystery collection in the 1930s. There are characters and themes that feel too contemporary, and moments that just aren't the stuff of mainstream detective fiction of that age. An element of pastiche (which is also present in the stories) is fine, but for it to work it still has to be based in plausibility, and that's not always present here.

The reliance on the stories within the novel also means we don't really get much sense of either Julia or McAllister as characters in their own right. The final outcome of Eight Detectives is satisfying enough as a plot resolution, but suffers from the previous underinvestment in the main players. Ultimately, Eight Detectives feels more like a cleverly-devised game than a novel, with clues to be found and puzzles to be solved, but not a whole lot else.