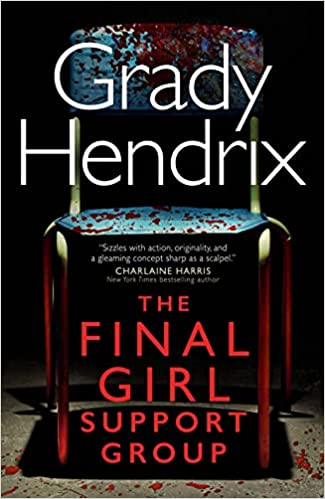 Grady Hendrix seems to specialise in writing horror fiction that takes a sly nod at the horror cinema of the 1970s, 80s and 90s. His previous book, The Southern Book Club's Guide to Slaying Vampires, is a sort of cross between Fright Night and Steel Magnolias and hugely enjoyable, so I was interested in reading The Final Girl Support Group too.

For those who aren't horror devotees, the 'Final Girl' is an essential element of the slasher movie. Halloween, Friday The Thirteenth, The Texas Chainsaw Massacre, A Nightmare On Elm Street - whether the killer is a supernatural entity or a homicidal human, if they're spree-killing teenagers, there will always be a Final Girl. The Final Girl is the survivor, the one who escapes death and probably defeats the monster (until the inevitable sequel, anyway). They're usually the 'sensible' one of their friendship group, the one who probably hasn't slept with her boyfriend yet, is trusted to babysit and only takes a sip when a bottle of booze is passed round, which says a lot about the morally judgemental nature of mainstream horror cinema, but still.

The premise of The Final Girl Support Group is simultaneously simple and complicated. Simple because the characters are exactly what the title suggests: a group of women who were all Final Girls in real-life murder sprees and who are now, unsurprisingly, in therapy as a result.

But it gets slightly messy at this point, and this took me a while to get to grips with in the book: each real-life Final Girl is also the subject of a slasher movie franchise. I can't deny that I found this confusing: at first, I wasn't sure whether the idea was that in the Final Girl Support Group universe, horror film characters are simultaneously fictional and real, or whether the moment a slasher--style killing spree occurs, it's standard practice to adapt it into a film series.

Turns out it's something more like the latter, although at the same time, the Final Girls seem to be famous as real people, not as their movie characters, which makes less sense to me. To add to this blurring of fiction and reality, Grady Hendrix has chosen to name each Final Girl after a real-life actor known playing Final Girl roles, and their film franchises are also clear spoofs of actual series of films. It's all very meta and post-modern, which I'd usually enjoy, but it's executed untidily (no pun intended).

That said, The Final Girl Support Group is both funny and insightful. Lynette Tarkington, survivor of a family massacre, is perhaps the most paranoid and anxious member of the traumatised, mismatched group, and is furious when the other members feel ready after 20 years or so to disband it. It's not that there's any particular camaraderie between them - they spend much of their time bickering. It's more that for Lynette, the group is all she really has, along with a houseplant to which she is abnormally attached. And maybe she's right to feel they still need each other, because it seems that someone is killing Final Girls again, and the mismatched group could be in terrible danger.

The Final Girl Support Group has a twisty plot with lots of references to the genre it's exploring, but it's also a fairly sharp analysis of the collective obsession we have with women as both victims and victors in horror, as well as our ghoulish fascination with serial killers. It looks at exploitation of victims not just by the media but also by the very people who are meant to be looking after them.

I don't think The Final Girl Support Group necessarily does anything new - there are elements of films like Wes Craven's New Nightmare and Halloween H20, for example, and strong echoes of Gillian Flynn's thriller Dark Places. But it's a smart, gripping, knowing read that kept me entertained.