The Hiding Place by Amanda Mason 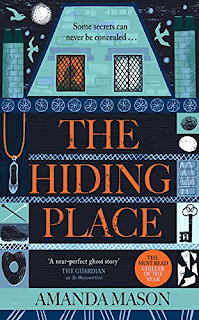 The Hiding Place is the second novel by Amanda Mason, author of The Wayward Girls, and like its predecessor it's a creepy, slow-build ghost story full of mystery, ambiguity and psychological horror.

It's set in Whitby, famously atmospheric and beloved of goths, but also a popular seaside holiday destination for families. Nell Galilee has come back to her home town with her husband Chris and Maude, her 12-year-old stepdaughter, to attend an anniversary party for some relatives and enjoy an extended holiday. The property they've booked is Elder House, an ancient building recently renovated and located with along with two other homes in one of Whitby's famous historic yards.

As soon as they arrive, Nell feels uncomfortable - but it is the house that's the problem, or her own anxieties? We know Nell and Chris are trying for a baby without success. We also know that there's some tension between Nell and Maude, and that Maude has mysteriously been taken out of school and isn't allowed to use the internet - why? Nell and Chris run a business together, but although it's been left in the capable hands of a manager, Chris seems to be taking an awful lot of emails and phone calls.

Elder House, tucked under the looming cliffs and the gothic ruins of the abbey, is full of ancient and sinister secrets. Is it really the right place for a family simmering with unspoken secrets of its own?

It's no spoiler when I say that no, it absolutely is not, and soon strange things start to happen. There's a damp, rotten smell that only Nell seems to notice. Things go missing and spark arguments. There are unexplained noises, and the lights flicker. And then a crack appears in the wood panelling, suggesting something might be hidden inside.

For Nell, there's also the baggage that inevitably accompanies a return to a home town after a long period away. Nell has no siblings and her parents are dead, and to an extent she feels like an outsider, yet at the same time the town is full of distant relatives, hazy memories and former classmates. Carolyn, who lives with her husband and teenage daughter Evie in another house in the yard, remembers Nell from school, but Nell can't recall her at all. Carolyn seems to be feuding with Gina, the third occupant and an expert in local history and folklore, while Evie and Gina's granddaughter Kym seem to be forming an unlikely friendship. It's clear that all them are connected to Elder House one way or another, but how?

The main characters in The Hiding Place are women and that difficult mother-daughter relationships are key to the intrigue. The few male characters are peripheral to the plot and, interestingly, not attuned to the house's eerie ambience. The book has a strong female energy to it, with themes of fertility and witchcraft surfacing as the story unfolds.

There's a fantastic sense of place in this book, with Elder House and the yard appearing almost as characters in their own right, steeped in dark history. The yard is a troubled spot, inhabited by troubled people, and the underlying feeling is that the location and the characters are feeding off each other. Nell feels threatened, almost poisoned, by Elder House, while Maude develops a bond with it that feels unhealthy, almost mutually co-dependent.

Amanda Mason has a tremendous gift for evoking an oppressively unsettling atmosphere, and for creating characters who are struggling with guilt, jealousy and loss whose relationships are full of mismatched parts and jagged edges. The Hiding Place is more a gradual descent into fear than a rollercoaster thrill-ride, and it's all the better for it: this is a cleverly plotted, engrossing ghost story that feels very personal to its characters. Excellent stuff.