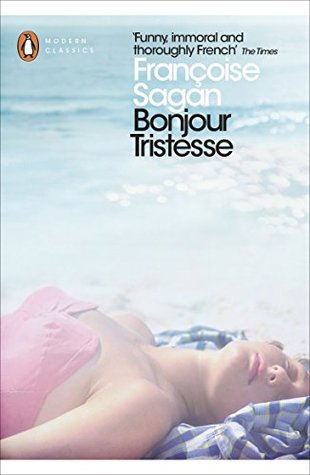 Bonjour Tristesse was first published in France 1954 when the author was only 18 and is now considered a modern classic. I first became aware of this book when I was about Cécile's age myself, when it was included on a reading list put together by my A-level French teacher, but because I hated her I had no interest in reading the book. I think I'm glad I didn't read it back then because I don't think I'd have appreciated it in quite the same way as I do now.

It's narrated by Cécile, a 17-year-old Parisian girl who is enjoying summer on the French Riviera with her playboy father, Raymond. Cécile's mother died when she was two and the relationship between Raymond and Cécile is far from conventional - he takes her to bars and nightclubs and casinos with his friends, he talks to her about his much younger girlfriend, Elsa, and every evening they sit and drink on the balcony of their villa. During the day, Cécile sunbathes, swims and goes on boat trips with Cyril, a handsome student in his mid-20s who professes his undying love for her. It's perhaps unsurprising, then, that when Raymond swaps Elsa for Anne, a sophisticated, intelligent family friend of his own age whom he announces he intends to marry, Cécile is worried that things might change. And sure enough, when Anne makes it clear that she's less tolerant of Cécile's idleness than Raymond, and certainly more concerned with her future, Cécile embarks on a Machiavellian plan to ensure things are restored to what she believes to be normal.

Bonjour Tristesse is incredibly atmospheric and evocative. Slim, tanned Cécile is effortlessly chic (as is her prospective stepmother Anne) and Raymond is the archetypal charming French womaniser. Sagan's descriptions of the Riviera in the 1950s and its glorious landscapes and weather are pitch-perfect, and it's all just terribly, terribly French in the best of ways.

The other great strength of this book is Cécile herself. Like all the best teenage girls, she's clever and observant and sometimes very self-aware, yet at other times painfully naive and shortsighted when it comes to the consequences of her actions. Some of the things she does are incredibly manipulative and unpleasant and she does them for entirely selfish reasons, and yet somehow I never once felt unsympathetic towards her. For all her scheming and disregard for the feelings of others, her indulgent father is the one constant in her life and the one truly close relationship she's ever formed and it's wholly understandable that she should be unsettled when she feels this is under threat. Even her animosity towards Anne stems mainly from Anne's confident sophistication, her intellect and her stabilising influence, all of which Cécile actually admires while at the same time, finds deeply intimidating. While Raymond sees his daughter's precocious notions as charming, Anne is much more astute, and Cécile is terrified of somehow being exposed. 'How difficult she made life for us,' Cécile says, 'with her sense of dignity and her self-esteem!'

Although at times Bonjour Tristesse is very funny, it's also very poignant and bittersweet. For all the bright sunshine, witty observations and swooning in the arms of handsome Cyril, there's an underlying darkness that never quite leaves this story, from the occasional hints of creepiness in Cécile's relationship with her father (who 'whether from inclination or habit, likes to dress [her] up as a femme fatale') to the jolting shock of the ending.