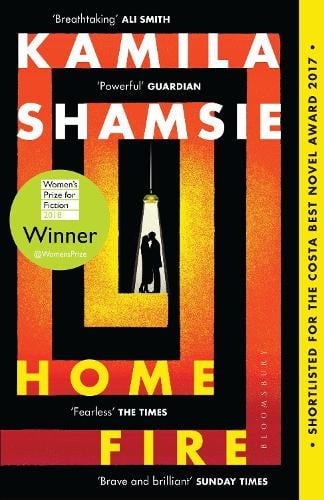 Kamila Shamsie's Home Fire won this year's Women's Prize for Fiction. It's about two British families with a Pakistani background. The Pasha family are three siblings living in Wembley: their parents are dead and Isma, now 28, has essentially been in loco parentis to her twin siblings Aneeka and Parvaiz for the last seven years. Eamonn is the son of a British Pakistani father, Karamat Lone, and an Irish American mother. When Eamonn meets Isma while she's studying in the USA, he becomes involved with the Pasha family.

What complicates things, however, is that the Pashas' absent father was a jihadi who was captured and killed in Afghanistan, and Parvaiz seems determined to follow in his footsteps ... while Eamonn's father is the Home Secretary.

We see the events of the novel through the eyes of various characters - Isma, Aneeka, Parvaiz, Eamonn and Karamat - and I found their differing attitudes to family, identity, Britishness and Islam interesting. I also enjoyed the contrast between the privileges Eamonn enjoys - he appears not to be particularly bright, but has had a lucrative job as a management consultant, is wealthy enough to take a sabbatical and is offered a job by a friend in a field in which he has no experience - and the difficulties experienced by Isma as a young Muslim woman with caring responsibilities.

Each character has some flaws, some very serious, but for the most part, I found their thought processes convincing and understandable even when I was horrified by the decisions they made. I say 'for the most part' because I did feel that the character of Aneeka became less and less convincing as the story unfolded, and towards the end I simply didn't believe in her any more. In fact, I found the gradual, chilling indoctrination of Parvaiz, who goes from being an affable teenager who campaigns to save his local library to being persuaded to join an Islamic terror cell, more convincing than Aneeka's reaction to it.

The problem is that the plot of this book is based on Sophocles' Antigone, and while the themes of Greek tragedy might be universal, I don't think the actual mechanics of Antigone's plot necessarily work in a contemporary setting. The behaviour of Aneeka (and to an extent Eamonn) simply didn't ring true for me and this marred my enjoyment of the book.
Email Post
Labels: antigone book review britain british family family drama home fire islam kamila shamsie muslim pakistan pakistani terrorism women's prize for fiction