I bought a copy of The Vizard Mask by Diana Norman from the local independent bookshop in my home town in 1995. The bookshop isn't there any more, and the book seemed to go out of print quite soon too. In fact, I know only one other person who has read it (my mum, because I recommended it to her).

I know two things about Diana Norman. One, she's dead. Two, she was the wife of film critic and pickled onion magnate Barry Norman. Neither of those things have any bearing on The Vizard Mask though: the important thing about it is that it's ace. 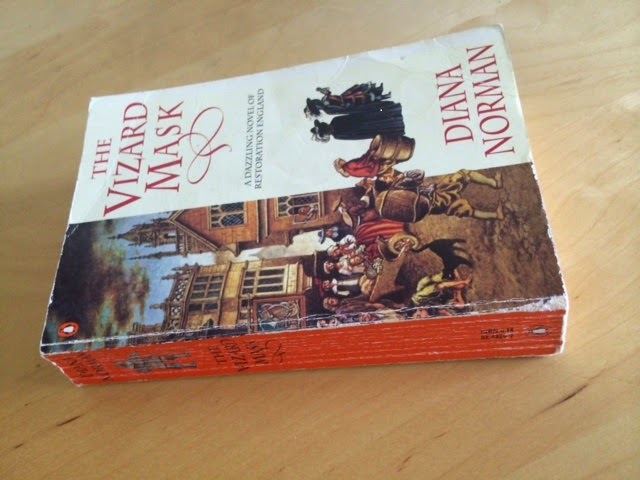 Set during the Restoration, the story begins with Penitence Hurd arriving in England from America, where she has been brought up among a community of Puritan settlers. An orphaned young woman, rendered almost incapable of speech by a severe stutter, Penitence is searching for her aunt. Appalled by the immorality she finds on the streets of London, she's horrified to discover that her aunt presides over a large brothel - but Penitence has nowhere else to go, and stubbornly sets about making a niche for herself in an environment in which she's horribly out of place. Soon, she begins to rethink some of her own values, and when the Plague sweeps through the city, her life undergoes a fundamental and irreversible change.

The Vizard Mask is lively, vibrant, gripping and epic in scope and ambition - the timespan of the novel covers decades, every one of the many characters is rendered in vivid detail, and the political and social turmoil that accompanied the Restoration period is key to the narrative. The struggles of women to make their way in a society in which women were essentially either wives, whores or servants are revisited time and time again throughout the story, and the friendships of women are the most enduring and touching relationships in the novel. The Vizard Mask is also teeming with rich historical detail that makes it a thoroughly immersive read. It's a proper, rollicking, action-packed, rollercoaster ride of a book.

I genuinely haven't got a clue why this book wasn't a colossal bestseller; neither can I understand why it wasn't adapted into a lavishly expensive, occasionally explicit BBC drama along the lines of the TV adaptation of The Crimson Petal and the White. The fact that it's out of print (and has been for years) is quite simply insane, as it's been impossible to track down paperbacks for about 15 years.

But now: the good news. However much some of you might hate e-books, if there's one thing they're good for it's resurrected novels that are no longer in print. Happily, The Vizard Mask has recently become available for Kindle, and at only £2.99 too. Buy it, read it, love it.
Email Post
Labels: #bookaday diana norman historical fiction kindle out of print the vizard mask