There are relatively few of these on my shelves, because if I buy a book that’s been adapted for film or TV I usually go out of my way not to buy the tie-in edition. I'm not sure why this is - probably misguided snobbery on my part.

However, here’s my very tattered copy of The Crimson Petal & The White by Michel Faber, which I bought just after the BBC2 adaptation had been screened. I didn’t actually see most of the TV series until after I’d read the book, which I’m glad about, because as usual, the book’s much better (although the TV series was still very well made and brilliantly acted; I can't say I wouldn't recommend it). 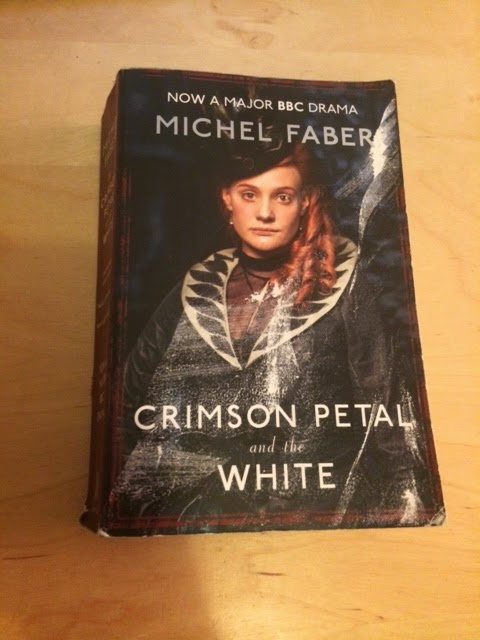 In the historical fiction category probably up there with Hilary Mantel in my all-time faves. When I read it, and got drawn into its seedy, unjust, yet strangely enterprising world, I was actually furious with myself that I’d never read it before, as I felt there were wasted years when I could have known all about it. It’s one of those books that I love to discuss with people, and it has one of my favourite heroines in all literature in Sugar, the main character – despite her many unsympathetic traits.

I won't go into more detail because I reviewed the book on this very blog a couple of years ago. If you're interested, you can read that review here.

Although I wouldn’t usually aim to buy a tie-in copy, I do quite like the cover of this one, although you wouldn't guess that from how poorly I appear to have looked after it. Romola Garai as Sugar looks fittingly uncompromising and confrontational in the picture.
Email Post
Labels: #bookaday film/tv tie-in historical fiction michel faber the crimson petal and the white